For the first time in over 70 years, Valentine’s Day falls on Ash Wednesday. These two holidays represent starkly contrasting ideas: one stands for an obnoxiously Hallmark-induced excuse to eat chocolate and daydream of romance, while the other symbolizes the inevitable death of every human and the solemn beginning of the Lenten season, a season marked by fasting, sacrifice, and prayer, a season leading to the death of Jesus Christ. On the surface, the holidays seem at opposite ends of the spectrum; their awkward clash akin to a middle school dance where the angsty emo kid slow dances with the class flirt. But I say all the better for it. For me, the coming together of the unlikely pair raises a question worth considering: What can love be in light of the unsavory truth that we all will die? 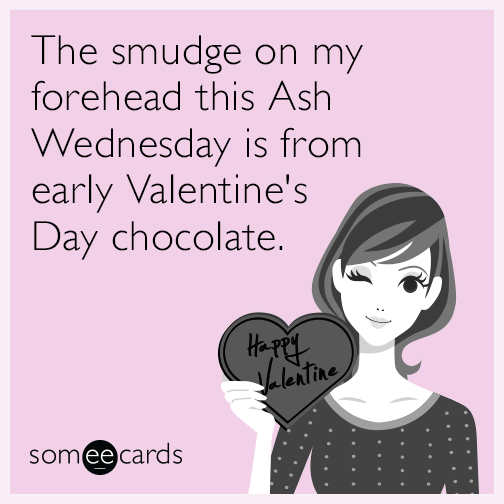 A helpful bridge to reconcile the two was an article that Mockingbird Ministries alluded to in their podcast last week. In the article What Romance Really Means After 10 Years of Marriage, Heather Havrilesky talks about how early on in relationships, and what will subsequently run wild tonight, romance is driven and heavily influenced by the super-charged question of “Will the other person love me?” Here’s Heather Havrilesky on how romance starts and how it inevitably changes with time:

I’m an advice columnist, so sometimes people ask me about how they can “keep the romance alive” in their marriages. This stumps me a little because, by “romance,” I know they mean the traditional version, the one that depends on living inside a giant, suspenseful question mark. This version of romance is all about that thrilling moment when you think that someone may have just materialized who will make every single thing in the world feel delicious and amazing and right forever and ever. It springs forth from big questions, like “Can I really have what I’ve been looking for? Will I really feel loved and desired and truly adored at last? Can I finally be seen as the answer to someone else’s dream, the heroine with the glimmering eyes and sultry smile?”

[But] After a decade of marriage, if things go well, you don’t need any more proof. What you have instead — and what I would argue is the most deeply romantic thing of all — is this palpable, reassuring sense that it’s okay to be a human being. Because until you feel absolutely sure that you won’t eventually be abandoned, it’s maybe not 100 percent clear that any other human mortal can tolerate another human mortal. The smells. The sounds. The repetitive fixations on the same dumb shit, over and over. Even as you develop a kind of a resigned glaze of oh, this again in, say, marital years one through five, you also feel faintly unnerved by your own terrible mortal humanness. 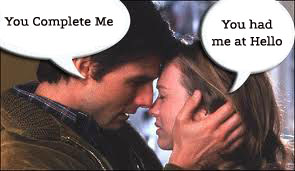 Romance is the longing for proof that you’ll be accepted by the other. And on a day where you’re also encouraged to call to mind your death in every sense of the word, being confronted by the weight of love seems to be our only hope. I think it’s appropriate that imagery often used in scripture points to Jesus and his love for his bride, the church. We who are bound to die long for proof that we are lovable. We long for someone to accept our mess because we can’t do anything about it, much to the dismay of everyone in the universe. But instead of someone loving us for who we are, we find Jesus Christ who died for us because of what we are; dead and dying and whose we are: his. And how, despite the lack of proof that we are lovely, he loves us. He loves us so much that he took the death that the ashes mark on our foreheads and placed it on his shoulders. He was able to do the improbable, the impossible; he made death lovely. Not lovely in the sense of chocolates and flowers. But in the deep sigh, the shaking of the head, and the loss of words that can only follow after a heavy weight that has been finally lifted. Ash Wednesday harkens to those feelings where we are faced with our mortality. But more than a mortality that knocks at the door of old age and is benchmarked by dentures and pacemakers. Yes, the ashes signify that. But it also signifies the weight that hits us in the middle of the night, or after a hard conversation, or in the throngs of depression, or the self-justification that comes from our mouths when we make a mistake. Or our sorry excuse for apologies peppered with “ifs” and “buts” to save face rather than to save a relationship or reconcile a wrong. It is the weight of death we remember as well.

Revisiting the gold mine that is Heather’s piece on romance, here are her insights on the most romantic thing her husband ever did:

I was very sick out of the blue with some form of dysentery. It hit overnight. I got up to go to the bathroom, and I fainted on the way and cracked my ribs on the side of the bathtub. My husband discovered me there, passed out, in a scene that … well, imagine what would happen if you let Todd Solondz direct an episode of Game of Thrones. Think about what that might look like. I’m going to take your delicate sensibilities into account and resist the urge to paint a clearer picture for you.

My husband was not happy about this scene. But he handled it without complaint. That is the very definition of romantic: not only not being made to feel crappy about things that are clearly out of your control, but being quietly cared for by someone who can shut up and do what needs to be done under duress.

Those powerful last lines harken back to someone else who I think got it spot on as well: “You see, at just the right time, when we were still powerless, Christ died for the ungodly” (Rom 5:6). 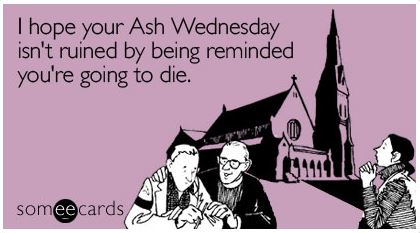 For love to be love, something (or someone) has to die. That may mean dying to expectations, to our selfish ambition or our vain conceit. It most certainly means saying to the other; “first and foremost, I love you before me.” Today, Ash Wednesday reminds us of the death march we are about to observe of Christ on his way to Calvary. And all we can do is watch as he looks toward the day of humiliation and defeat on the cross. And in a (truly) romantic way, we know that we have been quietly cared for by the man from Nazareth. We know that what he did was for love. Death and love, on a dreary day in February. Death and love.